I think you should take it down and stop working on it. I'll be engaging our lawyers on Monday if it's still up by then. [...] We were a tiny company when you interned with us [...] Luckily we're bigger now, and crucially have a lot of money to pay for top lawyers now if we're forced to go that route.

I received an official response from Replit and my open-source project will be back up soon; please see the bottom of the blog post for an update. The rest of the content here will remain as a historical artifact.

Hi, my name is Radon. I graduated college last year and now work as a software engineer in DevOps/Infrastructure. In my free time, I also maintain a number of open-source projects.

While I was in college, I interned at the startup Replit. This blog post is the story of how Replit is using legal threats and their venture-capital funding to bully me into shutting down an open-source project they don’t like.

Replit makes a webapp you can use to run code online in different programming languages. This is nothing new (just Google “run python online” for proof), so Replit’s value proposition is extra features like sharing your work, installing third-party packages, and hosting webapps.

I worked for Replit in Summer 2019, where I was asked to rebuild Replit’s package management stack and make it open-source. If you like reading about tech stuff, here’s the post I wrote for Replit’s blog, and here’s the code on GitHub.

I took a job elsewhere in Summer 2020, but still chatted with them occasionally by email when they reached out to tell me about something cool Replit had developed.

What was my open-source project? 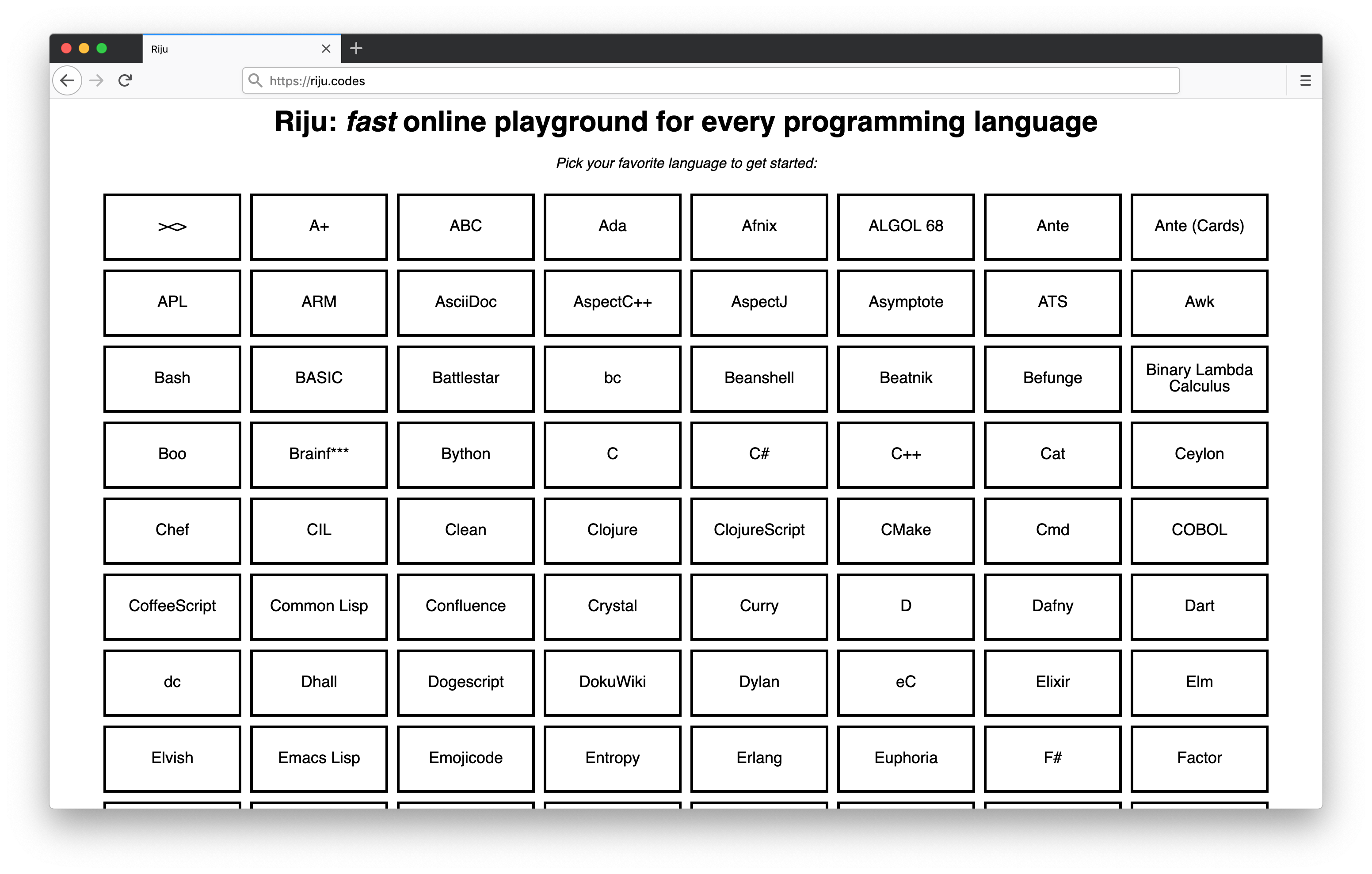 To explore that question, I put together my own little webapp that could run code online. After about a day, I had something that worked. (If you’re wondering why it was so fast—it turns out you only need 30 lines of code to let people run Python code in a webapp! This may be why there are so many websites for running Python online…)

After it was working, I started adding as many different programming languages as I could. As you can see from this excerpt of my project’s version history, I got a little overexcited:

I eventually ended up with 216 languages, including all 38 languages from Replit, all 100 languages from Yusuke Endoh’s “Quine Relay”, and a good deal more besides. You might ask: Why did I spend so much time adding obscure programming languages to a webapp nobody was going to use? Well, let me put it this way: Is it the weirdest 2020 hobby you’ve seen?

What happened when I shared my open-source project with Replit?

One day, I got an email from Replit letting me know about a new feature they released. I figured this was a good time to share my open-source project with them, in case they wanted to take inspiration from any of my work: 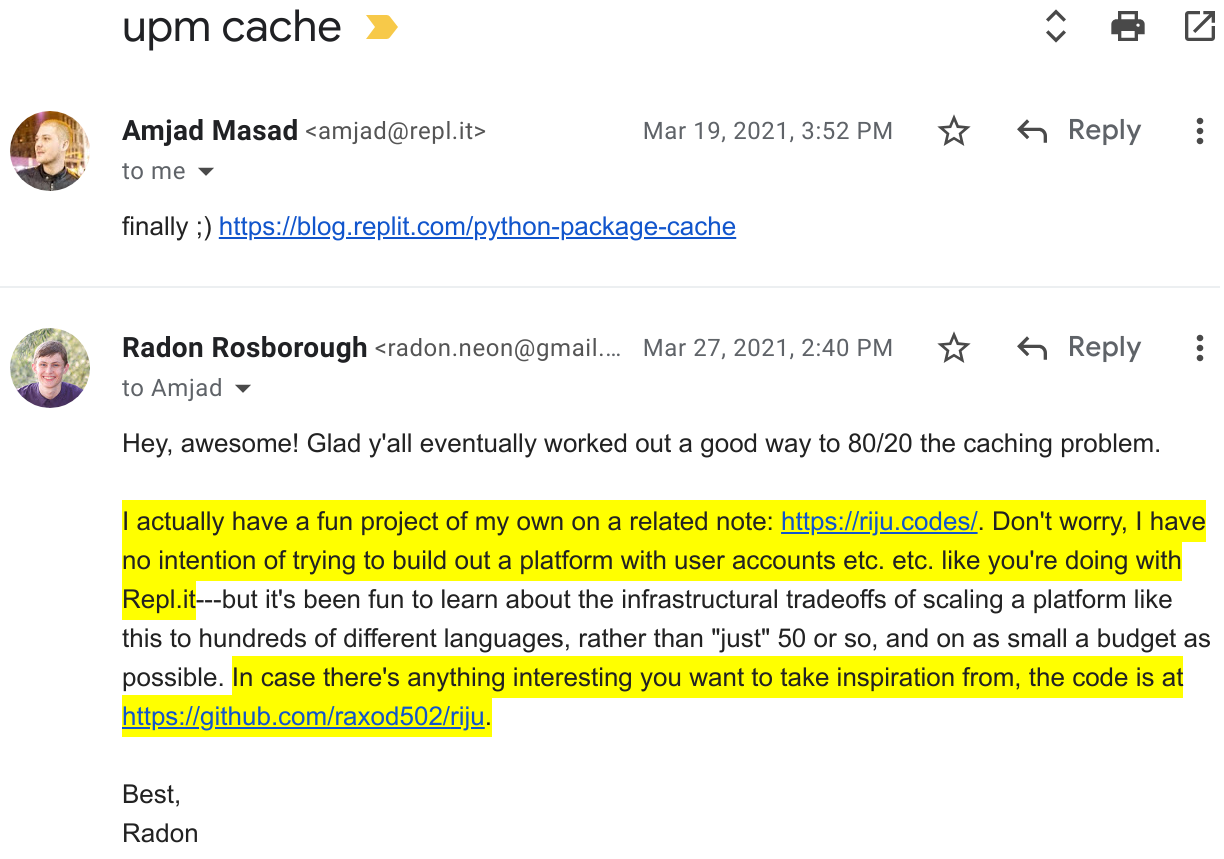 At first, I got a positive response. But then, 30 minutes later, out of nowhere, Replit accused me of unethical behavior and stealing their design: 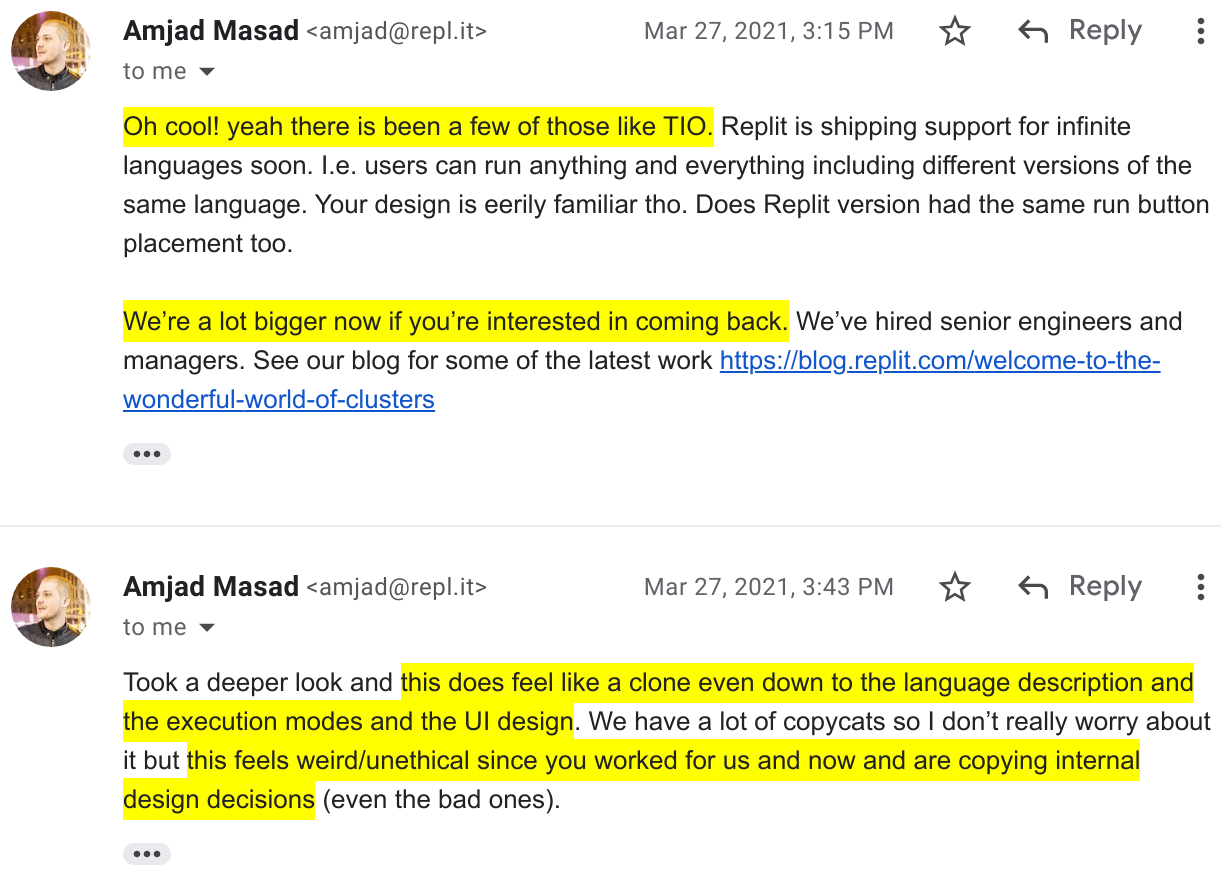 Now, none of the ideas I used in my open-source project were “internal design decisions”: they’ve all been published publicly on Replit’s blog (I knew this because I’d been asked to write some of those blog posts during my internship). And my project also wasn’t any more of a Replit clone than any of the other websites on the first few pages of Google results for “run python online”, most of which look exactly the same: 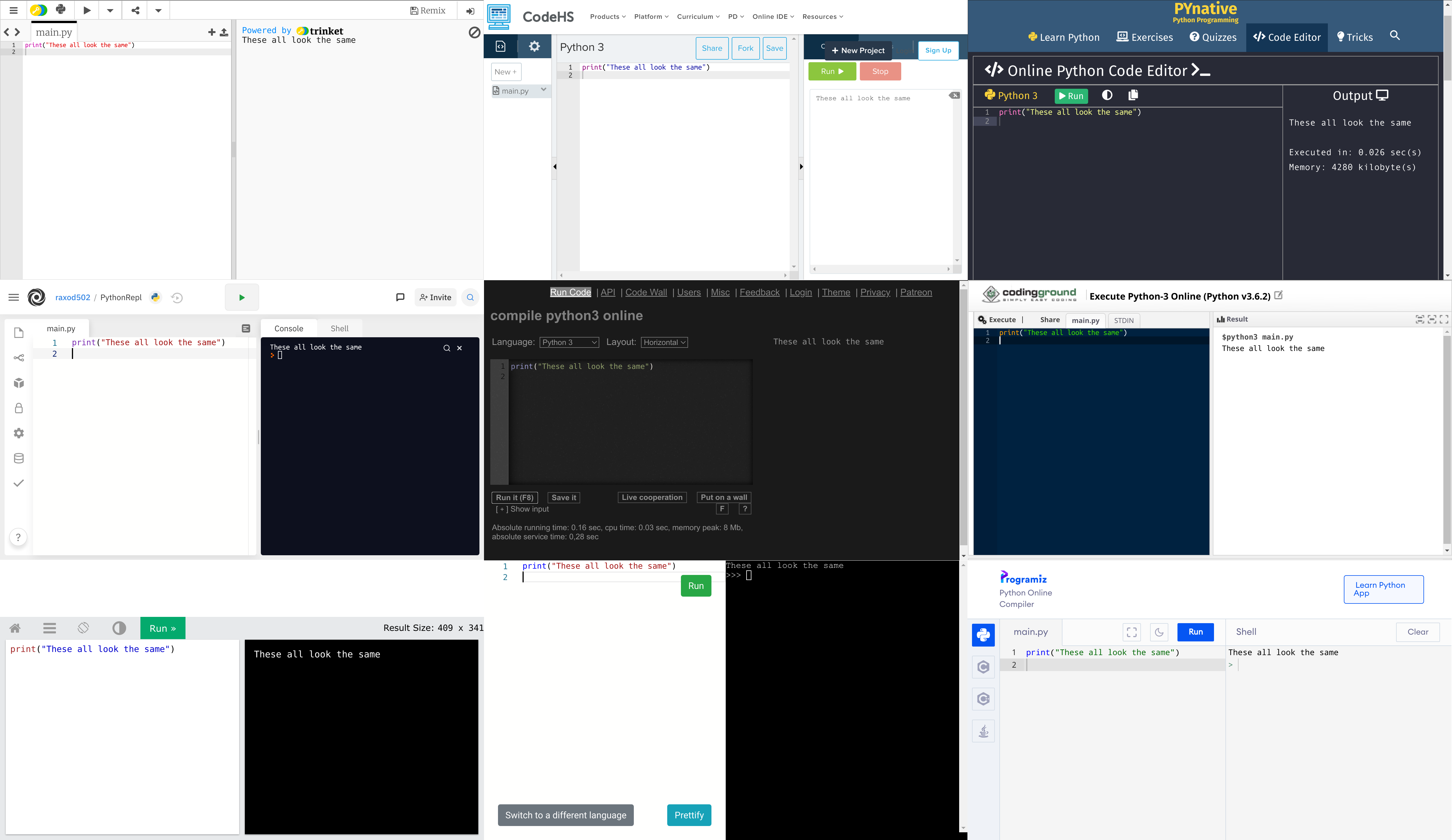 But I figured I might have missed something, so I asked for details:

(The rest of this email is basically me repeating the previous paragraph of this article, but with a lot more technical details. You can read the whole email on Imgur, mirrored on the Internet Archive.)

Unfortunately, Replit refused to provide any specifics on what they were saying I had done wrong, reiterated their previous statements, and threatened me with a lawsuit: 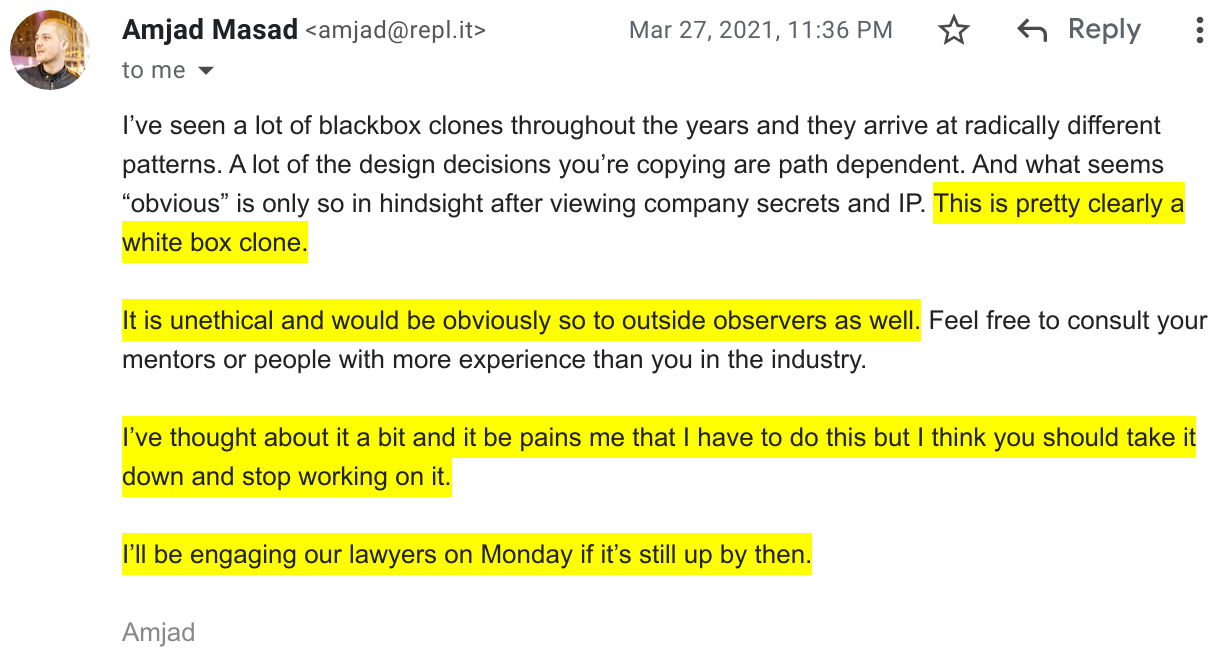 And then just to put a cherry on top, Replit sent me another email reminding me that they just raised $20 million from their investors last month, and they weren’t afraid to use it against me. The “me” in question being one of their previous interns who just graduated from college a year ago, and who isn’t running any kind of commercial operation whatsoever.

I’d like to point out two things about this email:

What happened after Replit threatened to sue me?

Naturally, I took down my project right away, gave it some time for feelings to cool, and sent Replit an apology. I figured something might have been lost over email, so I asked to get on a call:

Unfortunately, Replit ignored this email, so I sent them another one following up. This one got a response, but not the one I was hoping for:

Just in case Replit didn’t understand that I wasn’t OK with this situation, I sent three follow-up emails explaining as such over the next few weeks, all of which were ignored.

In other words, Replit stands by its threat: if I re-publish my open-source project, then they will sue me with “top lawyers”.

Replit claimed that my open-source project was:

Questions 1 and 2 have a fair number of technical details, so I’ve put them in a separate post. The TL;DR is:

Q: Was it unethical for me to develop an open-source project that’s similar to Replit, after working for them?

In my opinion, the answer to this question is no, for a number of reasons:

I’m not a business person. I’m just an open-source dev who likes to build weird things for fun. (If you doubt my track record of building things that don’t make money, just check out the list on my website, and note the conspicuous absence of anything that’s ever made a cent of revenue.)

I would never try to steal someone’s business after I worked with them. Hurting Replit was not my intent in working on Riju, and to accuse me otherwise—especially without asking a single clarifying question, and refusing all offers to have a discussion—shows a great deal of bad faith on the part of Replit, in my opinion.

If you’d like to decide for yourself who is in the right, I’m happy to put all of the evidence out in the open (except the code, because Replit’s standing by its promise to sue me if I do). Again, I have a separate post with all the technical details. And you can also read all communications between me and Replit, in full and unabridged form, on Imgur, mirrored on the Internet Archive). (Technical details about Replit internals redacted, as well as any statement that could reveal such details indirectly.)

Why would Replit do this?

However, Replit’s actions in this case reveal hypocrisy:

In Replit’s emails to me, their threats were based on the fact that I had worked for them in the past. However, I believe this reasoning is a smokescreen. To see why, let’s take a look at some tweets that Replit’s CEO, Amjad, posted just after threatening me by email: 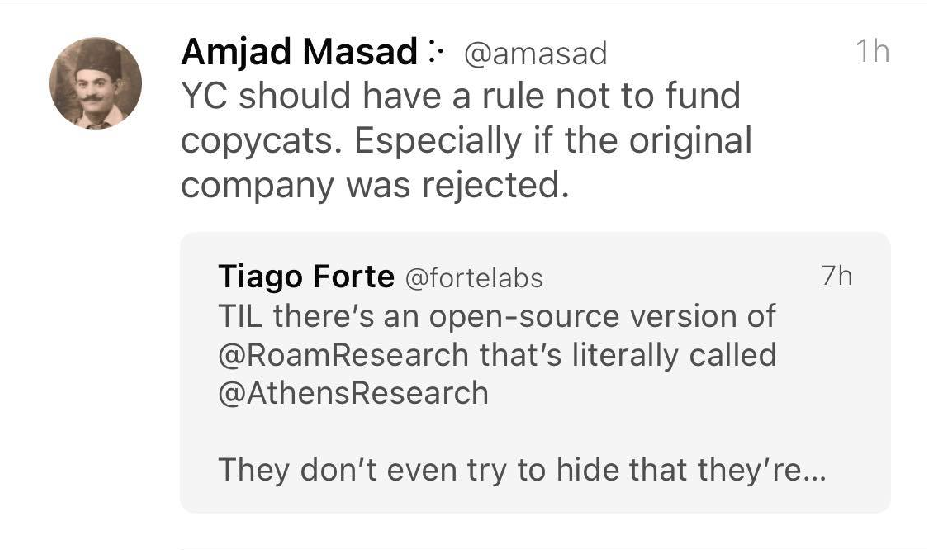 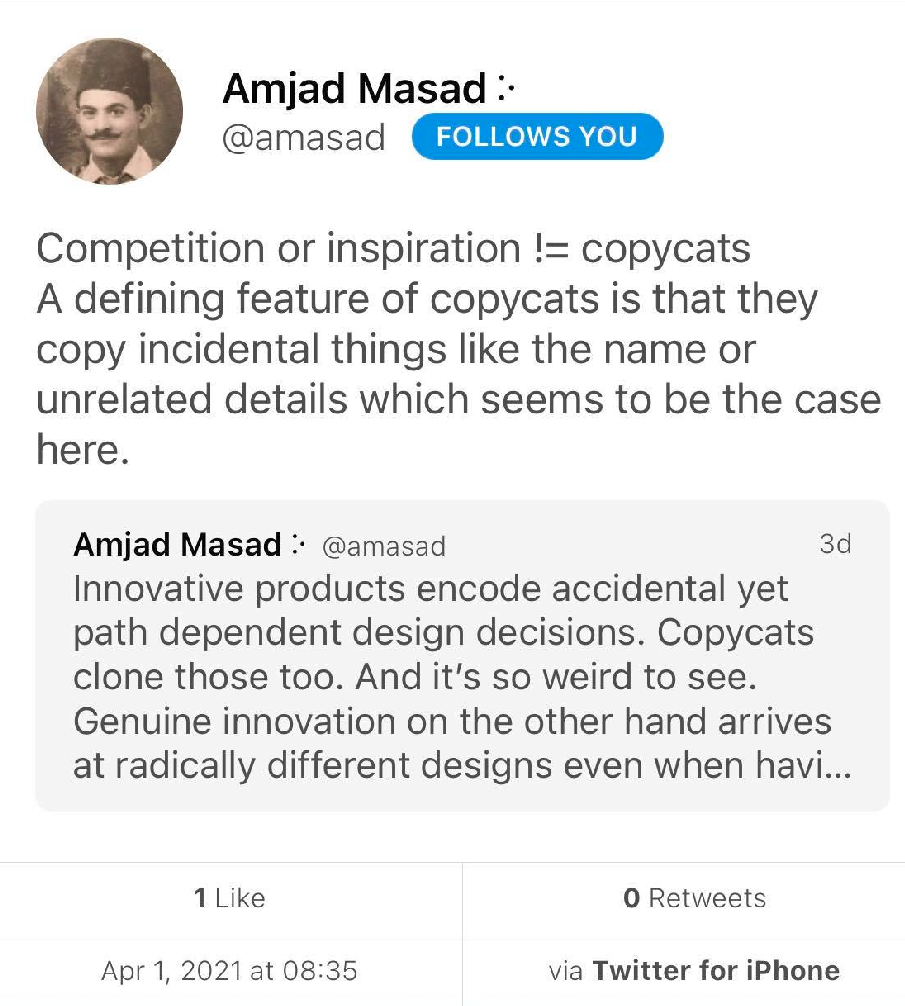 Amjad later deleted these tweets because they proved controversial: 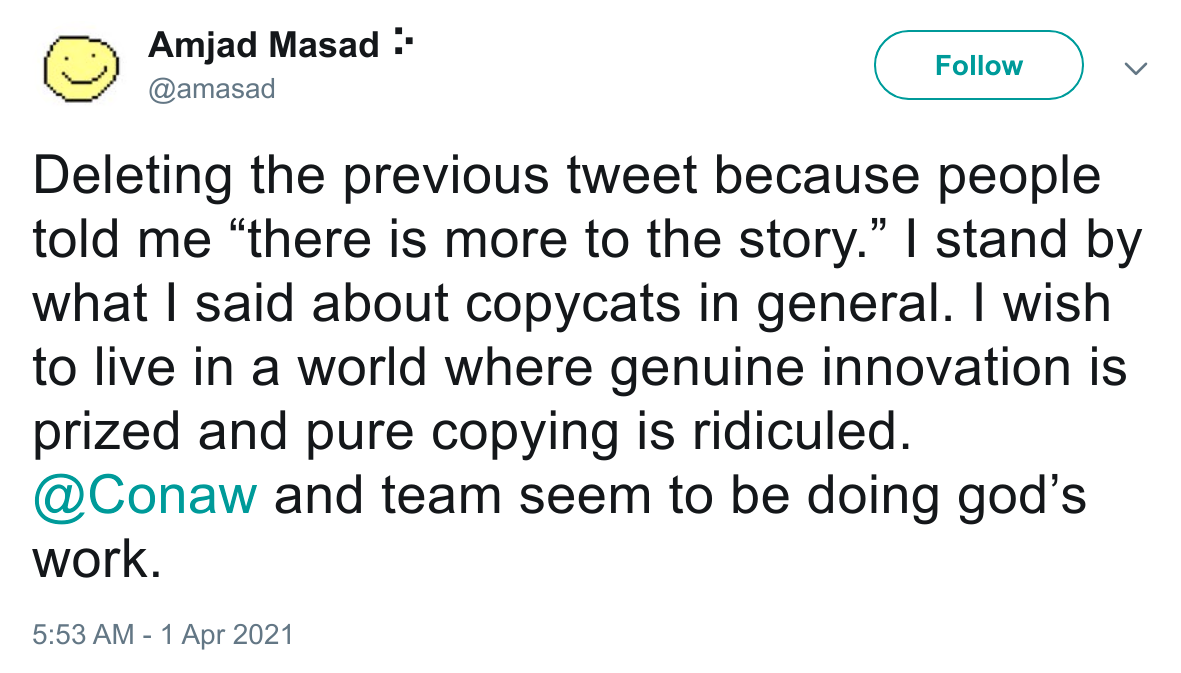 In these tweets, Amjad points out that Athens Research was clearly inspired by another company, and argues that they should therefore be “ridiculed” and banned from receiving funding. Furthermore, he says: “I stand by what I said about copycats in general”, i.e. he disdains all people that he thinks are “copying” existing ones, not just the specific company in his tweet.

There is a clear resemblance between Amjad’s comments on Athens Research and his legal threats towards my own project. He even used exactly the same word, “copycat”, in both. In the case of Athens Research, there was nothing Amjad could do to express his disdain besides denigrate them on Twitter. But in my case, since I had worked for Replit before, Amjad had an excuse to throw accusations my way—accusations that, if you aren’t familiar with the facts, sound like they could be legitimate.

I’d also like to reiterate that the person Replit is threatening with “top lawyers” and “a lot of money” is a new grad with no company, no funding, and no commercial ambitions. If someone with an actual commercial enterprise were to offend Replit, I shudder to think what treatment they might receive.

After I posted the article in the morning, it was discussed extensively on Hacker News. Around 5pm, Amjad posted an apology on Hacker News, which has also been discussed.

He also reached out to schedule a call, which I naturally agreed to: 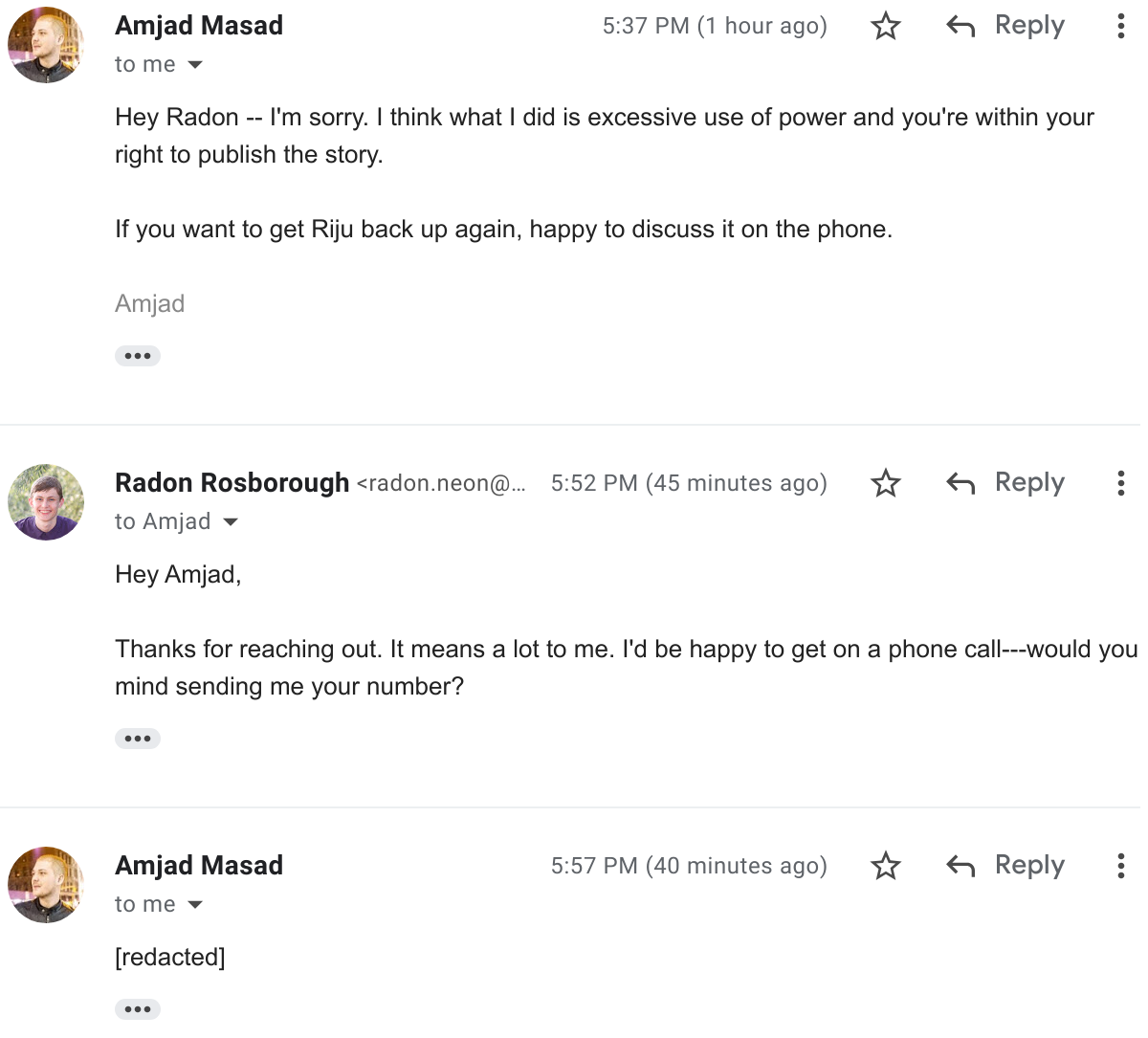 During the call, Amjad apologized for making legal threats, but reiterated that he felt I had made a clone of Replit and that I had acted unethically. Eventually we agreed to disagree, and he promised in writing that he was fine with my putting my project back up: 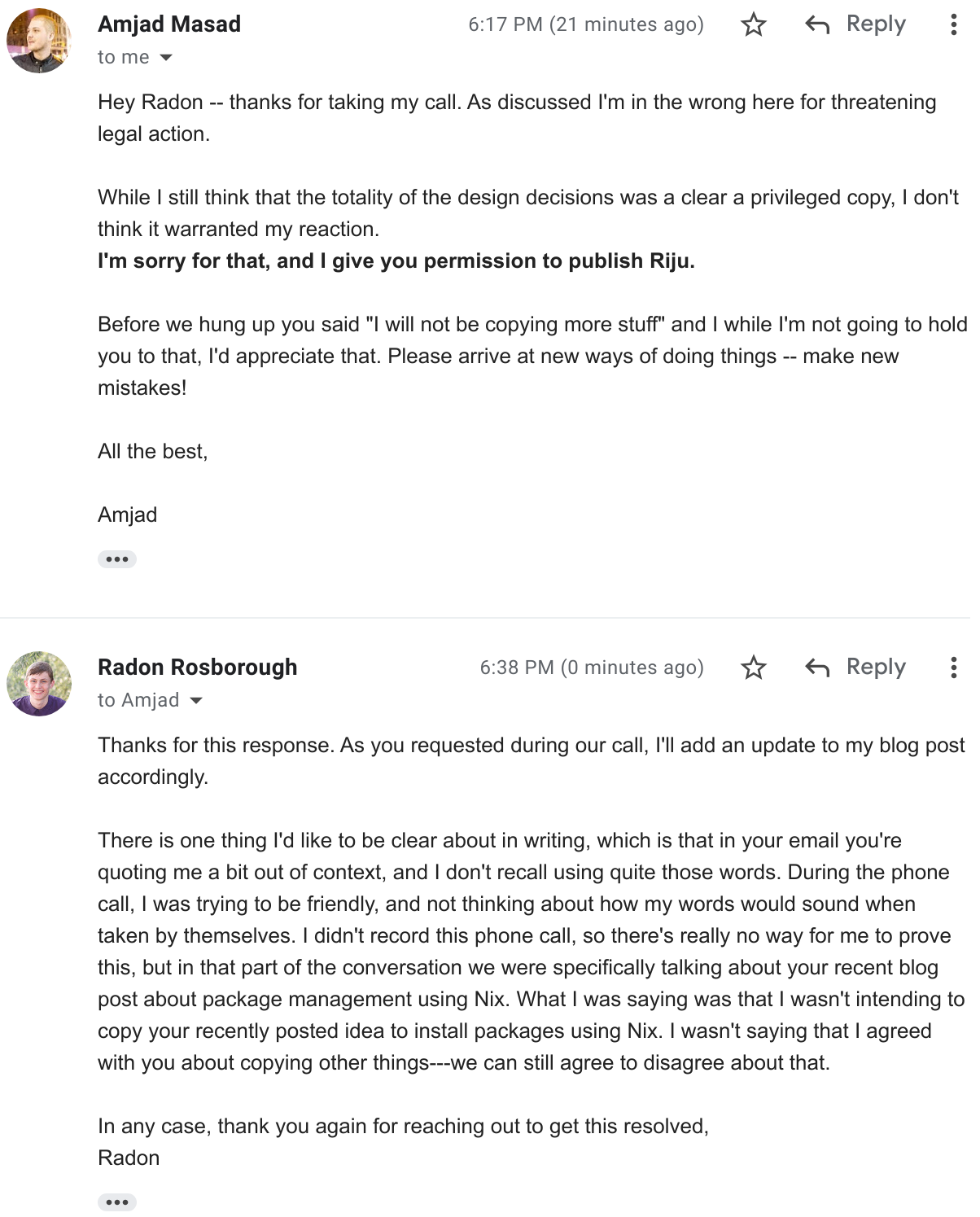 In retrospect, I’m a little disappointed that Amjad:

All in all, I think this could have gone better.

Nonetheless, I’m happy that we were able to get the situation worked out amicably, and I look forward to moving on with my life—including putting Riju back up, after I can get things compiling again :)

So is Riju back up now?

Yes! Check it out at https://riju.codes/, and join the community on GitHub at https://github.com/raxod502/riju. I’d love to work on the project with you <3